A. Mato Watakpe, “Poppa Capp”, is a Priest of Alexandrian Witchcraft, an Upāsaka of Ch’an Buddhism, a devotee of Santa Muerte, and a seasoned ceremonial magician.

A mystic at his core, Poppa’s childhood contemplation of the spiritual meaning embedded throughout the world around him quickly developed into his lifelong mission to learn and understand the mysteries of life, humanhood, and divinity.

Initially setting out on this mission by drawing inspiration from the Mexica and Otoe portions of his ancestry, he became an avid psychonautic explorer in his early teenage years through the extensive use of entheogenic plant medicines, ever attempting to experience the furthest reaches of human consciousness while simultaneously chasing his dream of holding conversations with divine entities.

Through the experiences gifted to him by sacred plant consciousness, Poppa began studying occultism, religion, philosophy, and psychology around the age of fourteen. He has always been a firm believer in the importance of both intellectual and experiential knowledge. Thus, his exploration of devotional practice, experimentation with magickal praxis and various divinatory methods, and his communion with spiritual entities, all commenced shortly after his studies began.

Growing up in the San Fransisco Bay Area, Poppa was in a prime location to explore magickal organizations such as the AMORC and the OTO directly, as well as spend a portion of his life with Buddhist monastics, before ultimately finding his true home in New Orleans as an Alexandrian Priest and devotee of the Goddess.

In May of 2018, Poppa was in a devastating car accident during which he was pronounced “deceased at the scene”. The bone in his right arm snapped and ripped out of his body, several bones in his right leg and foot shattered, his hip cracked and was protruding from his waist, two of his ribs snapped, the back of his skull fractured, and he was very quickly bleeding out – there was no sign of life when the officer and paramedics arrived.

It was through experiencing death and miraculously living to tell the tale that Poppa felt compelled to bring what he has gained through this life’s journey to as many people as possible, providing his magickal services and guidance in the occult on large a scale. Since October of 2018, Poppa has been a full-time ritual spell worker, diviner, and astrologer, as well as a writer, teacher, artisan, and purveyor of spirituality and the occult. He has read Tarot and deciphered astrological charts for hundreds of clients, and has successfully changed the lives of hundreds more through his spell casting services.

Poppa’s path led him to deeply study Hermeticism and the Hermetic Qabalah. It is this stream of esoteric philosophy, along with elements of rootwork, planetary magick, and the knowledge and methodology gained from various occult texts and experiences, that in conjunction, serve as the underlying framework for the system of operational magick that he has created and now offers to clients around the world.

During September and October of 2020, Poppa was invited to teach and present the monumentally in-depth Ceremonial Magic classes 101, 102, 103, and 104 with Crescent City Conjure’s Crossroads Academy. Poppa’s writing was first published in April of 2021 with Llewellyn Worldwide in Astrea Taylor’s book Air Magic. His contribution in Air Magic can be found on pages 156-159, under A. Mato Watakpe. Poppa presented his Ceremonial Magic class at WitchCon Online in February 2022, the first major occult conference where he was an honored presenter, and will be presenting the same class live in New Orleans at HexFest in August 2022, where he will also enter into the world of vending his artisan magickal products at festivals and gatherings. He now sets his sights on expanding his occult business and line of artisan magickal products, presenting and vending at occult gatherings and festivals around the world, authoring books as well as contributing to other publications, and continuing to offer his services and guidance to the public. 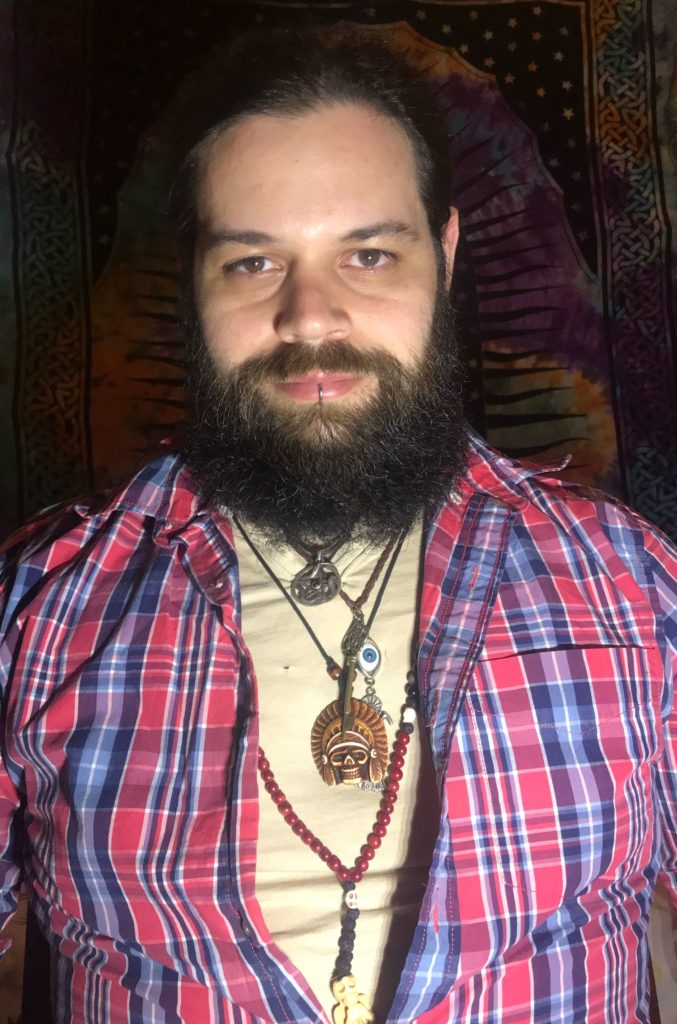